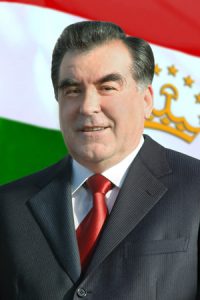 Emomali Rahmon was born to a peasant family on October 5, 1952 in Dangara district of the Republic of Tajikistan.

Emomali Rahmon began his labour activity in 1969 after graduation from Technical Lyceum №40 of Kalininabad city (presently Sarband) electrician at Qurghonteppa oil factory.
From 1971 to 1974 he served in the Pacific Navy Military Force. After the demobilization, he started working at the Lenin collective farm in Dangara.
Emomali Rahmon graduated from the Faculty of Economics at the Tajik National University in 1982.

From 1976 to 1987 he held posts of the secretary of direction and the Chairman of the Union Committee of the Lenin collective farm in Dangara. He later worked in party bodies.

From 1987 to 1992 he was the Chairman of the Lenin collective farm in Dangara.

On November 19, 1992 at the XVI session Emomali Rahmon was elected as the Chairman of the Supreme Council of the Republic of Tajikistan.

On November 6, 1994, Emomali Rahmon was elected to the post of the President of the Republic of Tajikistan by nation-wide voting.

On November 6, 1999, Emomali Rahmon was re-elected on the alternative basis and by nation-wide voting and assumed an office of the President of the Republic of Tajikistan for a seven-year term.

On November 6, 2006, at free, transparent and democratic elections, held on the alternative basis, Emomali Rahmon was elected as the President of the Republic of Tajikistan for a seven-year term by nation-wide voting for the third time.

The President is married and has nine children.

At the time when for the first time the glorious and worthy son of the nation Emomali Rahmon was elected the leader of our country, our homeland – the newly independent Tajikistan was experiencing difficult times. Bloody wars and inter-Tajik conflict, which led to the loss of many lives and property, were a great threat to the country’s unity and the existence of the Tajik nation.

Due to his wise decisions, persistence and extraordinary courage, Emomali Rahmon saved the country from the threat of disaster, brought together the nation and returned thousands of refugees back to their homes.

Thanks to the strong will of the Tajik President, ruins were restored within a short time, grand constructions were erected, a road of Unity was built, providing all the year round communication between all corners of the country and automobile roads were constructed, allowing the country to get direct access to the ocean and develop relations with the countries of far and near abroad.

The most important achievements and successes of the country are the result of selfless labour and bold steps taken by Emomali Rahmon.

The reward for these extensive efforts were love and respect that Emomali Rahmon won from the people of Tajikistan and among the tens of thousands of our compatriots abroad. He also earned huge respect from the world community that every time shows to him as to an authoritative leader of Tajikistan, an experienced politician and an exponent of universal values ​​and ideals.

The greatest achievement of Emomali Rahmon is, undoubtedly, the establishment of lasting peace and national unity. The bitter experience of internal wars in the world suggests that no single state could overcome its opponents on the battlefield and stand at the head of the state machine, management structures and military agencies, using weapons, equipment and its warriors.

By ensuring peace and national unity, Emomali Rahmon laid a solid foundation for moving towards the economic recovery and the beginning of constructive affairs.

To date, the state independence of the Republic of Tajikistan has been officially recognized by more than 150 countries of the world. Tajikistan has recognized the UN Charter, the Helsinki Final Act, the Paris Declaration and other international agreements and pursues its internal and foreign policy, protecting human rights, regardless of nationality, religion or race.

Emomali Rahmon has made a grand contribution to enhancing the international credibility and prestige of Tajikistan, in addressing global issues. Repeatedly speaking from the UN tribune, he drew the attention of the world community not only to the problems of Tajikistan, but also to Afghan issues, fight against terrorism, extremism and illegal drug trafficking, the uneven progress of countries of the world, providing humanity with safe water. In particular, he has attracted the world community to address the issue of Afghanistan, which was turning into the base of terrorism and extremism.

President Emomali Rahmon displays a far-sighted and serious approach to important issues affecting the future of humanity. At the proposal of Emomali Rahmon, the United Nations declared 2003 the International Year of Fresh Water and 2005-2015 as the Decade for Action «Water for Life». Currently, most international and regional events are held as part of this Decade. This initiative of the President of the country is the pride of every citizen of Tajikistan.

Over twenty years of independence, under the leadership of Emomali Rahmon our country made confident steps forward on the path of building an independent democratic state. During this time, Tajikistan has had its own flag, emblem and anthem. Principal foundations of statehood –a national army and border troops have emerged and matured. Tajikistan became a member of the authoritative international organizations and established political, economic and cultural ties with most countries in the world. The fundamentals of the constitutional system and public administration were streamlined, national currency was put into circulation and national passport was recognized.

Thus, the historical merits of Emomali Rahmon consist in the fact that he took over management of the state, prevented the threat of its collapse, extinguished the flames of civil war, restored paralyzed power authorities, particularly the law enforcement bodies, created a national army and border troops, provided the conditions for consolidation of power and state, guaranteed the nation’s peace, returned the refugees and displaced persons back to homeland. He laid a solid foundation for building a new society of Tajikistan, held constitutional reform in the country, created a new Constitution of Tajikistan, provided political and legal basis for signing General Agreement on the Establishment of Peace and National Accord on June 27, 1997. Emomali Rahmon brought peace between Tajiks, which was instructive experience for the world community. He created the conditions for national revival, marked the beginning of creative works, radically improved the socio-economic situation of the people, eliminated the threat of hunger and contributed to the growth of political authority of the state on the international arena.

For his invaluable contribution to peace in Tajikistan and strengthening security in the region, other outstanding achievements in enhancing the friendly relations and cooperation between nations, Emomali Rahmon won high honors and awards of state and various organizations around the world.

Merits of Emomali Rahmon both domestically and abroad are universally recognized. For invaluable contribution to the development of universal human community, he was awarded the Gold Star of Albert Schweitzer and the honorary title of professor of the World Academy of Medicine on Section of Humanities. He was the first of the world’s politicians bestowed such a high award.

In 2005, on the eve of the celebrating the National Unity Day, the President of the Republic of Tajikistan Emomali Rahmon was granted high award –a gold medal “For the strengthening of peace and accord between nations” of the International Federation of Peace and Accord. It should be noted that Emomali Rahmon was first to win this award among the heads of CIS member states.

In different years, Emomali Rahmon was awarded the diamond order “Maecenas Star” –the highest award of the International Charity Fund “Maecenases of the Century”, the Order “National Hero of Afghanistan –Ahmadshoh Masud”, the prize of the International Fund of writers and journalists of the Turkish Republic, ruby ​​star “Peacemaker”, Gold Medal of the National Assembly (Parliament) of the Arab Republic of Egypt, the Badge of Honor of the Commonwealth of Independent States, the Order of the Olympic Council of Asia, the Golden Medal of UNESCO by Jaloliddin Balkhi (Rumi), the Golden Order “The revival of Silk Road”, the Golden Medal by Nikolay Blokhin – the highest award of the Academy of Medical Sciences of the Russian Federation, the Order “3 Star 1st Degree” with golden ribbon of the Republic of Latvia, the order of Prince Yaroslav Wise 1st degree of Ukraine, Pakistan Badge – the highest state award of the Islamic Republic of Pakistan and a number of other decorations and prizes.

At the new stage of constructing young Tajik state, a fortune bestowed upon the ancient Tajik nation unique historical personality –President Emomali Rahmon – the person, who represents the highest qualities –justice, generosity, courage, compassion and unique ability to unite the people. It is the combination of these qualities that has brought society to a high level of self-knowledge.

Thanks to the consistent efforts of Emomali Rahmon Tajikistan was rescued from the national tragedy in the late twentieth century and strengthened its state independence, so that the Tajik nation after the millennium has made remarkable achievements on the path of national revival and makes confident steps to a better, more prosperous and self-sufficient future. 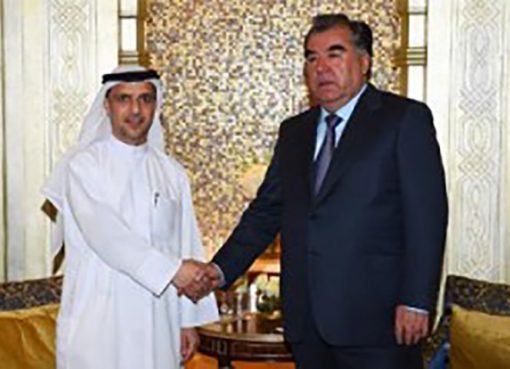